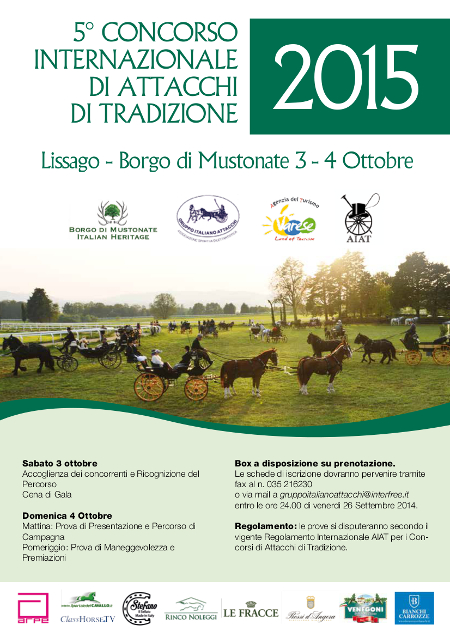 It took place at Borgo di Mustonate di Lissago under a splendid summer sky …with masses of enthusiasts ready to applaud the elegant spectacle of sparkling carriages, harness and hats.

Preparations were at the pinacle that such an international event aspires to. The GIA staff (Gruppo Italiano Attachi) outdid itself in professionalism, efficiency…and tireless application to the task at hand. The security team (Giacche Verdi), commanded by Captain Adriano; plus the secretarial structure allowed no margin for im-perfection .  Timing was on the dot … punctuality, under the supervision of Baron de Langlade, President of the AIAT, was a question of honor.

No doubt that the event would be extra special. From early morningand from all over Northern Italy the event attracted passionate crowds with cameras and TV professionals … prepared to savor a full day’s excitement. The particular atmosphere engendered by historic carriages and evoking their epoque, was unmistakable.  The standout composants included Pasquale Beretta’s American jewel (mid XIX Century); Alfonso Locati’s  Rally Cart Dosà Dos, driven by Francesca Villa; the Break of Belloni; belonging to Edgardo Goldoni, plus the splendid Grand Break Cesare Sala belonging to Csotanzo Tameni as well as the Siamese Phaëton of Jacek Janton which arrived from …Poland!!.

An international competition demands an international jury and all its accoutrements’, plus sophisticated and global adaptations and requirements. Starting with the Lake of Varese for its setting (particularly for the presentation),the program continued with the «  Routier « and, in the afternoon, the «  Maniability. «

Competitors were divided into 5 categories.  There were 9 teams in the category of 4 horses, a first on the Italian driving scene. Another « first » was Jozsef Dibak’s team of mules which recently won the Alps and Danube Cup.

The beauty of the feminine competitors, Chiara, Francesca, Laura and Paula…graced their competence, for the pleasure of all.  Also there were lots of young ,and even very young ,participants, eager to show off their skills in the presence of such accomplished heroes as Francesco Mattavelli, Angelo Bianchi and Edgardo Goldoni.

After its concert, theCorpo Musicale San Giuseppedirected by Maestro Ivo Fibioli, the musicians accompanied the prize-giving ceremony (complete with national hymns for the winners) and the triumphal parade, complete with the Radetzky March, at the end of the much applauded ceremony. Winners included Chiara Usuelli, winner of the pony category,Gianluigi Orsenigo with 1 horse, Fiorenzo Erriwith his pair, Costanzo Tameniin the 4horse category and Jozsef Dibakwith his 4 mules.

The Rossi d’AngeraTrophy for the best presentation score went to Fiorenzo Erri and his pair KWPN harnessed to a Spider Phaeton by Flandrau-NY, 1870.

GIA’s Tradition Trophy attributed to he, or she, who obtained the two best scores(judged on the totality of points) at the GIA 2014 (Le Fracce, La Venaria Reale et Lissago)was awarded to Giorgio Balzaretti.

Gruppo Italiano Attacchi is most grateful to all those who contributed to the success of this wonderful event….including international judges, participants all-categories: Messrs.Christian de Langlade, Giuseppe Del Grande and Reinhold Trapp,the public , more than a hundred volunteers….and, of course the competitors themselves whose contagious passion was so essential to this triumphant day.

A special thank you is reserved to our member Francesco Aletti Montano, the generous proprietor, who worked with us throughout and welcomed the entire team, assuring the success of this 4° Concours International d’Attelage de Tradition de Lissago.