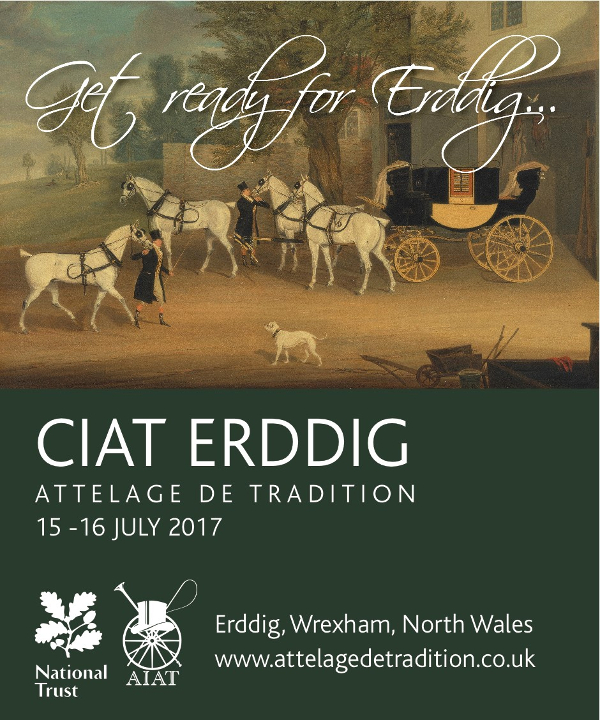 Erddig near Wrexham, is one of the crowning jewels in the National Trust’s treasures of historic properties and this summer, a unique event will occur to complement the 40th anniversary of the estate joining the National Trust. The 1200 acre 17th Century estate is no stranger to modern carriage driving, Erddig often hosts fast paced modern driving trials and enjoys a working heritage of carriage rides around the park with it’s famous shire horses and donkeys.
This year, Erddig and the National Trust will host their first Attelage de Tradition event, a premier horsedrawn carriage driving competition drawing interest from all around the United Kingdom and Europe.
CIAT Erddig will be an exciting new event for traditional horse drawn carriages that would have once graced the forecourt of Erddig 100 years ago.  The competition follows the popular event format that is gaining rapid interest across Europe at their great castles, palaces and chateaux and until recently at Picton Castle in Pembrokeshire. The event is run over two days where competitors will be judged on the correctness and authenticity of their turnout followed by a marathon road drive the next day. The road drive around the country lanes of the estate will also include a number of judged challenges to test their driving skills. On Sunday afternoon, the competition will conclude with a third stage, a challenging but thrilling cones course in the main arena that will test the driving skills of the carriage drivers. With scores being accumulated throughout the competition, the winners will only be revealed until the grand finale.
Event organiser and host National Trust Carriagemaster Medina Dicks states “it is only natural that we bring the original style and elegance of traditional carriages back to Erddig as it complements the popular interest in heritage at this magnificent National Trust property. We look forward to seeing the spectacle of these wonderful carriages being used as they were originally intended”
The underlying principles of the competition promotes best practice carriage driving as well as encouraging the use of original traditional vehicles that would otherwise be consigned to museums or worse still, be discarded and neglected. The event helps to raise the awareness of traditional standards, encourage safety, improve driving skills and promote good animal welfare, factors that are all essential for traditional carriage driving. With advance plans well afoot for the July event, sponsors competitors, volunteer helpers and spectators are welcome to join in the celebrations where they will receive a warm welcome at Erddig.
CIAT Erddig will take place on the weekend of 15-16 July 2017 and forms part of a network of similar competitions in the UK at CIAT Glamis Castle in Scotland (3-4 June) and CIAT Euston Park in Suffolk (26-27 August).
Further details about the competition can be found online at www.attelagedetradition.co.uk