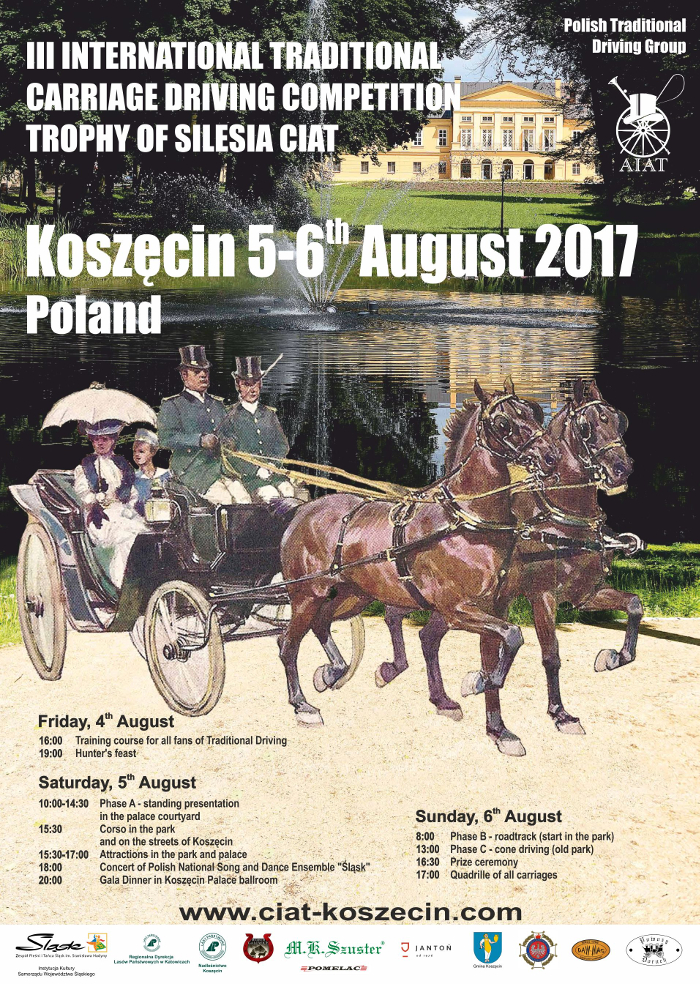 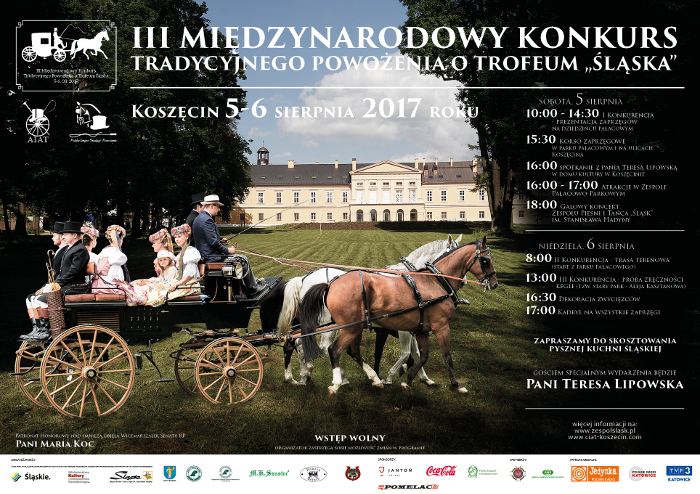 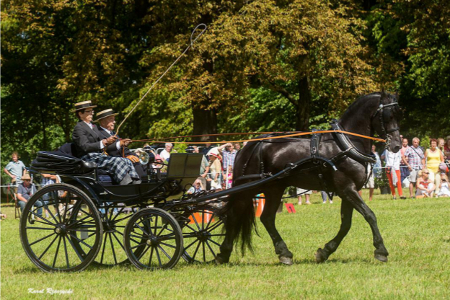 Arrived since Friday with splendid weather,  and warmly welcomed by Krzysztof Szuster, Tadeusz Kolacz, Marek Doruch and their wonderful team of helpers, drivers and judges settled comfortably in Koszencin for another beautiful CIAT.
This ideal place was put at their disposal by the National Ensemble of singers and dancers or Slansk and the public had the great privilege to witness the most marvellous show on Saturday evening !

To start with the event on Friday evening, we enjoyed a delicious informal dinner under a big tent in the yard of the castle, during which our hosts and some Polish drivers made us taste their specialities, amongst them unforgettable smoked trouts !

Then on the next day, beginning of serious matters, starting with the briefing followed by the  inspection of the road track in the company of the 29 drivers, most of them Polish but also coming from France, Germany and Switzerland.
In the afternoon, the Presentation went on with 8 singles, 15 pairs, 1 Winchester and 4 teams and  was judged by Baron Christian de Langlade, President of the AIAT,  assisted by Raimundo Coral Rubiales, Vice President ot the Real Club de Enganches de Andalucia, and Tadeusz Kolacz, initiator of the Historical Carriage Museum of Galowice.

At 18 :00 came the marvellous show mentionned above, then an excellent dinner gathering all people present, including numerous and well-known personnalities, thus showing their interest  and support for this beautiful event.

During the Road Track on the Sunday morning, horses and passengers enjoyed a light breeze and a nice parcours through the village and the neighbouring forest.
On the afternoon, an extremely well designed course for the Cone Driving in a meadow below the castle fully satisfied the drivers. Nice sun, not too hot. A lot of public. In conclusion, the Prize giving ceremony showed again to everyone, if necessary, that Koszenczin certainly is a wonderful location for this kind of event and can be sure of a promissing future !

Please note that next year the III CIAT Koszenczin will take place on 17th and 18th June 2017 and not in August like for the two first ones. 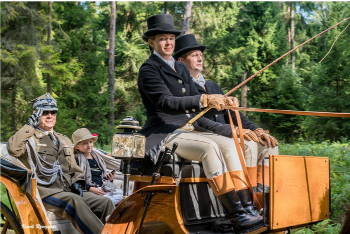 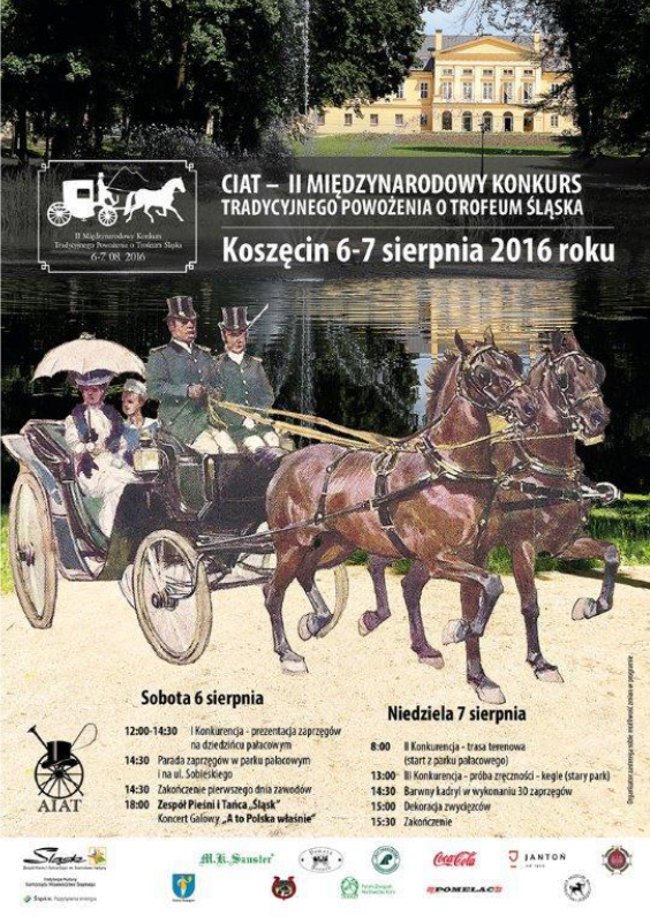 The small village of Koszecin constitutes  a grand  place on the cultural map of southern Poland.  The Folk Song and Dance Ensemble "Slask" has its headquarters in a beautiful palace here and invited fans of coaching to the First International  Tournament of Traditional Driving Silesia Trophy 2015  on the palace grounds  August 7 through 9 , 2015 (CIAT - Koszecin 2015.)  The  participants came in large numbers and represented Switzerland, Germany, Sweden   Poland and even Australia.  This was the biggest in the short, three-year old, history of Polish coaching competitions event of its kind. The  competition was conceived  and jointly organized by Carriage Museum Galowice, MK Szuster and  the carriage producer Doruch.

The special guests of this event were the Polish Culture Minister and the AIAT President Baron Christian de Langlade with his wife Antoinette. Judging duties were performed by Toni Bauer from Germany, Raimundo Coral from Spain and Tadeusz Kolacz from Poland. Accompanying the competition were numerous cultural offerings such as driving photography exhibit, performances by folk groups, a fabulous  parade through the Village of Koszecin, and a particularly memorable attraction for both the participants and guests, which was the  gala performance  of "Slask"  Ensemble, resplendent in its 100-person  stage presence.  Its dynamic repertoire included songs and dances of each nation participating in the competition.

On the day preceding the competition,  very popular proved to be a coaching school , which consisted of both theoretical  and practical instruction. Almost 80 people participated in it,  including  those who came to compete, as well  drivers  hoping to take part in future events.

The competition  in Koszecin presented a wonderful mix of elegance and Polish tradition.  Luxury  and  gentlemen coaches  intermingled with wagons, which arrived from Polish villages. During the Presentation , the  interesting and colorful wagons and costumes of the Tatra  Mountains Highlanders  (gorale)  pleased  the judges.

Due to tropical weather  (36 Centigrade) , the Terrain Route  leading through beautiful forests was shortened to 13,4 km.  The shade of 100-year old pines provided relief for  horses and  people.

The agility trails and competition finale were watched by  1,500 spectators who enthusiastically applauded quadrille performed by all 23 vehicles.

The audience awarded its prize to Wieslaw Sadowski driving a Phaeton with four Frisians.

The next Koszecin competition will take place August 6 through 7, 2016. More info. www.ciat-koszecin.com