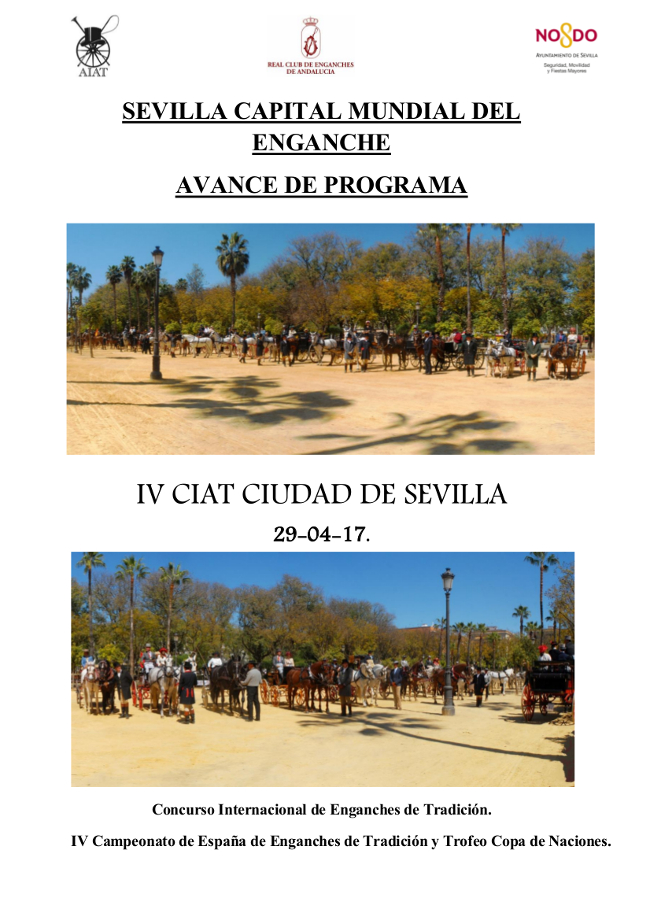 The first International Competition for Traditional Driving took place in Seville just before the Feria, as well as the annual Spanish Championships!

Many people know the incredible beauty and atmosphere that reigns in Seville normally … However, when Feria time approaches, a special fever takes hold and won’t let go.

There are carriages and horses everywhere, all the time…all sorts.

There are bull fights, the cafés are full and the noise is inescapable.

Joyful crowds of pals greet each other, everywhere.  Birds, dogs and grandmothers get into the act.  Children giggle and tear about. The Cassettas are reserved for year after year, and nothing could keep the locals from joining the bubbly festivities.

Le Real Club de Enganches de Andalucia was the center of all carriage activity. In the beautiful Museo de Carruajes the President Mr Jesus Contreras Ramos welcomed all those concerned with his usual kindness ! And the next day, the members outdid themselves by their competent organisation of the traditional driving contest in the Town of Seville.

It was a triumph.

Saturday morning, May 3rd, thirty-four turnouts (chosen from the 50+ postulants) converged on the Plazza d’Espagne for the first test, the Presentation …mostly Spanish, obviously, were there in all their glory…but also Italians, Portugese, and Danielle Van der Wiel, the charming English wife of the Belgian harness maker who was also driving a pair of Spanish horses. …

Judges were impressed by the quality of horses and carriages, and the immense progress accomplished in the precision and exactitude in the harnessing, as well as with the high level of the drivers, following carefully the AIAT rules.

The best proof of all this was in their performance in the Maniability…a joy for the eyes of beholders.

Bravo for the organization of Seville’s first CIAT which was such a success that the second is already programmed for next year.

And here is a special tip -of - the -hat for the Aranda family…father, son and grandson…for whom carriage driving is really a family affair….with their Mail Phaeton Barker and Co,  their  superb PRE (Pure Spanish Breed), and their rare Demi-Coach Cesare Sala…as well as a very pretty Dog Cart de Retif!!!